The acanthus leaf appears on many of our products. 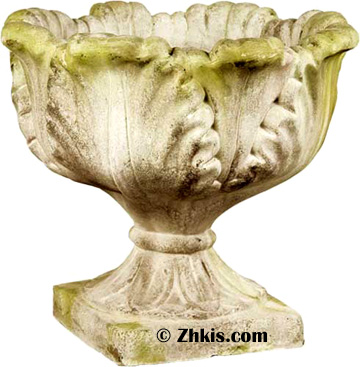 So much so we have made a page just for it. Why is the acanthus leaf so popular with the old architectural elements of the Greco-Roman world? The Greeks and Romans just seem to love this plant.

It appears all over the place from the base of the Corinthian column all the way to the top of the pediment and cornice. The Romans as well used the acanthus leaf to decorate their elaborate temples and buildings. The leaves from this plant flow out from all parts of Greco-Roman architecture and their cultural elements. Winding and scrolling everywhere including their pottery, oil jars and jugs, as well as fountains, planters, and many other kinds of artwork.

The acanthus plant itself grows primarily in the Mediterranean region and the islands of the area.

The Mediterranean climate is sunny with hot and dry summers, the winters mild and rainy. It is a large leafy plant that has jagged and spiny leaves. The acanthus plant also goes by the name of “bear's breeches and sea dock” but it is mostly refer to as the acanthus plant. The acanthus plant is a perennial plant which is a plant that comes back every year and does not need to be reseeded. This type of plant lies dormant in the ground during the autumn and winter months. It comes back each year on its own. It is also a rhizome type of plant, that is, a plant that shoots out roots that turn and then grow to the surface and become more leafy foliage. This kind of plant is sometimes referred to as a creeping plant or even invasive in its nature. It tries to take over and invade other plants and the surrounding area. It does very well in hot environments and salty soils. It is a very hardy and rugged plant with great adaptation skills

The acanthus plant has been used in China, India, Southeast Asia, the Mediterranean area and its outlying islands. As well as the Middle East. This plant has a long and extensive history of medical and medicinal uses. All parts of the plant have been used in some form or another for medicinal purposes. The plant itself will thrive in salty soil and in turn produces a salty leaf and oils. The salt in the leaves acts as a preservative for food. Foods were wrapped stored in the big leaves. The high salt content also acts as a desiccant, it dries out the air around it. In Southeast Asia the leaves have been used to store rice, the acanthus leaf draws the moisture out of the air preserving the rice. The plant has been used topically for skin elements, such as Leis mania which is a parasitic disease, and many other skin ailments such as bacterial, fungal infections and burns. It had been used as a natural antigen or antibiotic in general. Other topical uses include anti-inflammatory, bone and joint healing aid due to the mucilage and tannin it contains. Different parts, not just the leaves, of the plant were also used, including the stock, roots and even the seeds. The plant was also ground into particles so it could be administered orally. With its concentration of alkaloids it was used as a painkiller, it was well known for helping anything from a headache to rheumatism. Taken orally, it has the ability to flush out toxins and poisons. It has been used for centuries in India and Southeast Asia as an anti-venom remedy from various poisonous snakes. The plant contains chemicals that flush out the liver, the ability of this plant to cleanse the body of toxins was widely understood in those parts of the world. It was common to eat the leaves of this plant as a defensive posture when going into deep wooded areas. There are many other uses not listed here that the plant has been historically used for. There is currently a lot of research with this plant to substantiate its historical use. Today modern scientific research is being done on the acanthus plant. Scientists today are currently looking at its antioxidant and anticancer capabilities.

With a plant like this it is no wonder that it has come to symbolize immortality – rebirth – longevity and healing. Throughout these regional areas, with a plant like acanthus, is no wonder it was adopted into their buildings, temples, artwork and other common items like planters, jars and other vessels. We see it the most in the Greco Roman empire, this plant had actually become part of their culture, due to it being so important in their society. As time went on the Byzantine architecture,buildings, and art works. Sometimes referred to as the Eastern Roman empire, continued using the acanthus leaf in their architecture works as well. Under Constantinople’s rule it was incorporated into the Cathedrals of the day. Even though the acanthus leaf was used in Cathedral architecture it never became a Christian symbol. Not even when Christendom suffered its Great Schism, dividing into the Orthodox and Roman Catholic Church. This famous leaf continued to exist in architecture right through the middle ages with churches and other buildings of great importance. The Gothic Churches adopted it as well, in their enormous and elaborate cathedrals. With no nook or cranny left unadorned we find the leaf there as well as another architectural element the gargoyle. That we will discuss in another article. Along with the Gothic style churches were Romanesque style.

Both the styles brought a new architectural element, the portal or archways, which were adorned with acanthus. The acanthus leaf also found its way onto other artwork such as ironwork and metal scroll work. As we moved away from large stone structures the acanthus leaf found its way into wood work. We can see this today in some of our Victorian homes, carved into newels, crown moldings and wooden panels. We see the acanthus leaf present still in our modern world. Once you recognize this famous leaf you will start to notice it everywhere. It appears in jewelry in cameos, wallpaper, borders and many things in our everyday life we just don’t notice but it’s there.

As we mentioned earlier this leaf has come to symbolize immortality – rebirth – longevity – healing. Thru time, the acanthus leaf motif would find its way all the way to the grave, this leaf representing the afterlife and immortality of the soul. The acanthus leaf adorns many mausoleums, tombstones and funerary items. Funerary celebrations and ceremonies often have this leaf depicted on various items for that celebration to the next world. We will see this beautiful leaf more when we look at the “Five Noble Architectural Orders”. Before that you may want to go here to learn some other architectural terms and pronunciations terms. You can also go to our Library Page to find other articles like this one.
Quick View