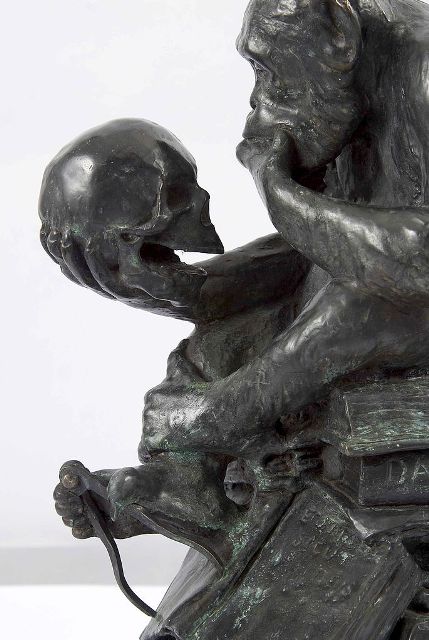 This is one of the most loved statues we have. It is sure to start a conversation and is a very thought provoking piece. The sculpture goes by many names: "Rheinhold's Monkey," "Darwin's Ape," "Smart Monkey," "Monkey with Skull," and I'm sure other names throughout the years.

The statue was originally sculpted by Hugo Rheinhold (1853–1900). He did not start out his career as an artist but as a merchant, running a trade company from San Francisco to Germany. He was married but it did not last as his bride died a little over a year after they were married. Hugo became depressed and sold his trading company. He then moved to Berlin and studied art. Reinhold only created a handful of sculptures as he only lived to be only 47, with Darwin's ape being his most popular. It has been said "What brings together Charles Darwin, The Bible, and Shakespeare’s Hamlet? Rheinhold's Monkey!”

Meditation on a human skull is actually an old European cultural tradition that Rheinhold used in his masterful piece. In the graveyard scene in Shakespeare’s famous Hamlet, Hamlet held up the skull of Yorick. Shakespeare used this scene to show Hamlet contemplating his mortality. But the sculpture has more going on with it than just an ape and a skull. Please keep in mind there are many modern versions of the sculpture and some details have been lost or omitted. This can easily be seen by the differences in the statues that we sell here. The original bronzes (as they were in production for a while) go for many thousands of dollars.

The original piece has the ape sitting on a stack of books. One of the books is marked "Darwin" and the book at his feet is the open Bible with one of the pages torn. Another detail is a set of calipers (an instrument used to measure things) hanging from the ape’s foot. So the sculpture is asking which is true—did I evolve and I will really become a man some day or was I created an ape and will always just be an ape? The calipers as well as the stack of books he sits on (that he must have read) suggest that he is contemplating this. Darwin's Ape is a wonderful sculpture and thought provoking piece.