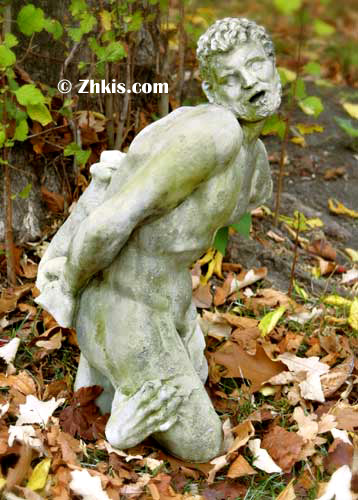 I must say the first time I saw this statue something looked strange. This guy with his hands behind his back and what looks like monster claws dragging him away. He is actually Milo of Croton. There are many stories and legends about Milo. This is one of them. This is a Greek classic statue of the competitor Milo. Milo was one of the strongest and best athletes in all of Greece. At the Greek Games Milo would carry a full sized cow on his shoulders across the arena with out stopping. He trained for this all year long by carrying a baby calf on his shoulders every where he went. As the calf grew in size so did Milo’s strength and stamina. As the story goes one day Milo was walking down a wooded path and came across a man trying to split a stump to make way for wagons. The man working on the stump was tired and Milo offered to help. Milo with his great strength figured he could pull stump apart where it had already started splitting. Milo struggled with it for sometime but with no success. The man that hand been originally working on the stump had left to get something for them to eat and drink when the man returned he found Milo with his back against the log and his fingers stuck deep into the split of the log. It appears that Milo had exhausted himself trying to split the stump. The stump had closed on his fingers and trapped his hands by sheer poor luck. They believe a pack of wild dogs or a lion had come along and found Milo in this dreaded position. The animals attacked and killed Milo. This statue represents this tragic story, this piece would look great up against a tree or stump. You would also have the fun of telling the great tale of how Milo’s great strength and power could not save him, and his confidence got him into this compromising position.

More About Milo of Croton